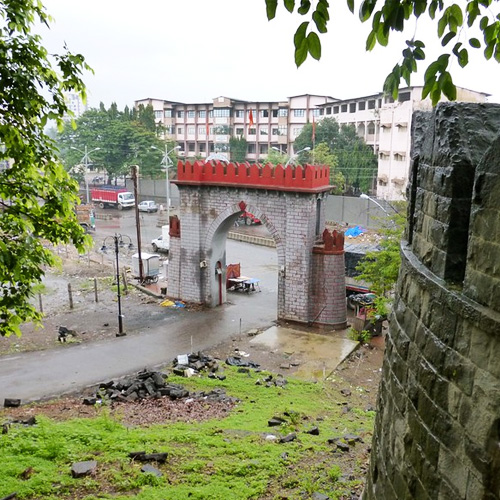 Durgadi Fort located to the west of Kalyan city. Kalyan is the busiest junction as well a key location from ancient times. This was an important international harbour developed during the Satvaahan era. The city was well fortified and it is said it had 11 bastions and multiple entrances. The fort was built by Chatrapati Shivaji Maharaj and marks the initiation of Maratha Navy.

Durgadi is a derived from union of two Marathi words Durga (A Hindu Goddess) and Gad (Which means ‘Fort’ in Marathi language). Durgadi Fort is Kalyan city’s most adored historical monument, a sacred worshiping place and even a recreation spot for many Kalyankars.

Chatrapati Shivaji Maharaj Shivaji Maharaj captured Kalyan and Bhiwandi from Adilshah on 24th October 1654. He built a fort near the creek as a support to Kalyan and used it as a dock to manufacture ships. It is said that wealth was found during excavation for the fort foundation. Since it was due Goddess Durga’s blessings, the fort was named “Durgadi”. There were 340 Portuguese workers employed to build the fort.

Durgadi was captured by Moghul Sardar Hasan Ali Khan in 1682. Sambhaji Maharaj recaptured it. However the Moghuls took over it in 1689. It later went into the hands of Peshwas. In 1728, the Portuguese attacked Durgadi, but were repelled by Peshwa commander Shankarji Keshav.